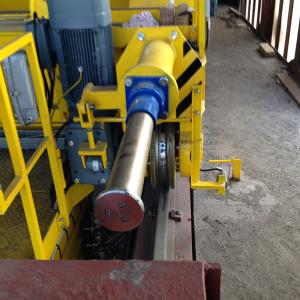 OSHA 1910.179 calls for bridge and trolley bumpers designed to effectively absorb the damaging energy of impacts to promote safe, efficient operation and minimize equipment stress. Stops also play an important safety role, inhibiting trolleys from moving beyond the designed limit of travel. And rail sweeps, when placed on both ends of bridge trucks, help clear objects from runways that could damage or derail the wheels—not to mention your productivity.

OSHA 1910.179 also sets the standards for the placement of guards. These include guards to protect personnel from moving parts, such as gears, chains and chain sprockets, and guards to keep hoisting ropes from touching bridge conductors or rubbing against other crane parts that will wear the ropes prematurely.

CRANE 1 technicians are well-trained and experienced in identifying safety gaps, and spotting equipment that may not provide the required protection necessary for safe, reliable crane operation.

The following excerpts are taken directly from OSHA 1910.179:

A crane shall be provided with bumpers or other automatic means providing equivalent effect unless the crane travels at a slow rate of speed and has a faster deceleration rate due to the use of sleeve bearings, or is not operated near the ends of bridge and trolley travel, or is restricted to a limited distance by the nature of the crane operation and there is no hazard of striking any object in this limited distance, or is used in similar operating conditions. The bumpers shall be capable of stopping the crane (not including the lifted load) at an average rate of deceleration not to exceed 3 ft/s/s when traveling in either direction at 20 percent of the rated load speed.

Bridge trucks shall be equipped with sweeps that extend below the top of the rail and project in front of the truck wheels.