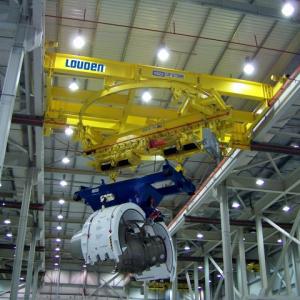 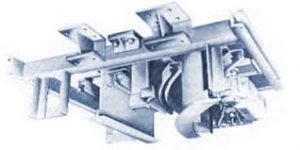 Standard structural members such as I-beams and wide flange shapes are engineered and chosen based on the load bearing or wheel load needed to support the hoist trolley or crane, which means the depth and weight of the beam along with the lower flange width and thickness vary as well. Trolleys or end trucks that run on the lower flange have to adjust to this change in width and size.

Patented track beams are similar in that they are engineered and chosen based on the load-bearing and wheel loads needed to support the hoist trolley or crane, but the lower flange is always the same width; 3-1/4” or 3.33”, which allows for uniformity in end truck or trolley selection.

There are 2 different lower running flange thicknesses associated with patented track (typically 7/16” and 11/16”), classified as “standard” patented track and “heavy duty” patented track. This rarely changes the wheel or end truck selection though. And unlike I-beams, the flange on patented track is flat, straight and true without camber or sweep.

In addition, standard structural shapes are produced with poor tolerances that include bowing, flange width and thickness variability and much softer steel that can lead to wear and maintenance issues in a production environment.

S or I-beam structural members are made of a mild steel with a tapered flange for a running surface. It is rolled with a normal maximum of .45 carbon. The tapered flange, together with a necessarily contoured wheel, results in a point of contact for the carrier and crane wheels at a comparatively thin point of the flange. Additionally, the taper causes the wheels to try and run down the slope, creating a wiping action between the wheels and the running flange.

Wide flange structural members are manufactured and rolled similarly to I-beam but have a flat flange not a tapered flange like the I-beam. Because of this, the lower flanges of a wide flange beam are often weaker in their wheel load and load bearing capabilities. The result is that in order to offset the lower flange loading capabilities, excessively heavy wide flange members must be chosen. This adds cost and additional dead loads to support members or buildings. These large, wide members guarantee that the wheels of the carrier or trolley will ride at the far edges of the flange, causing peening to occur. When using wide flanges for runways, caution must be used to verify both beam span maximum loading and lower flange loading.

Patented rail, on the other hand, has a high carbon, high manganese, precision rolled lower ‘T’ section with a flat flange and equal thickness throughout. The lower flange steel has a content of .55 – .65 carbon and .60 – .90 manganese. Hardness, as rolled, is 225 Brinell minimum. The two flat surfaces on which the carrier wheels roll are in the same horizontal plane, assuring maximum contact for the wheel treads. Wheel contact with this rail continues to cold roll the surface, hardening it so that the smooth surface is continually improved. The result is maximum life without peening and minimum wear due to flanging.

Because of the tapered flange on I-beam, the wheels of the carrier or crane must have a similarly tapered tread or must be mounted in a slanted position. In either case, proper contact between the wheel and the beam flange is difficult to obtain. As I-beam sizes and dimensions vary, so does the angle of the taper; thus prohibiting the “one size fits all” tapered wheel on most of the standard trolleys or carriers manufactured from seating, and ultimately running properly. The result is thrust loading on bearings; skewing of wheels which in turn causes excessive wear of bearings, wheels and the rail itself; flanging of the rail; binding of carriers and cranes.

Flat tread, flanged wheels are necessary to keep the wheels running correctly on the lower flange of a wide flange. The loose tolerances permitted in the rolling of structural members allows for uneven lower flange dimensions and straightness; creating a premature wheel and flange wear and failure.

Patented rail with a smooth and flat running surface permits mounting wheels in a vertical position with the thread in a horizontal plane. When coupled with associated carriers designed for the patented track, it greatly reduces thrust loadings on bearings. Carriers with swiveling heads eliminate the skewing of wheels, binding of carrier or crane wheels, and flanging of the rail.

With patented rail, there are ergonomic benefits for the operator as well. The close tolerances of patented track along with the flat, smooth running surface result in minimum effort required to move a load; it is estimated that it takes half the effort to move a load on patented track than with structural members.

Structural members are limited to straight runs or monorail systems only; no switches, curves, transfer sections or latches. Expansion can be troublesome; the various flange types, widths, and thicknesses will require different trolley types or sizes.

The relatively “loose” manufacturing tolerances of structural members make it difficult to install where multiple pieces are joined and used for a continuous runway or monorail. Structural is known for having excessive camber and/or sweep, all of which are considered within spec when milled. Camber is a “bend” or “bow” in the rail along the horizontal axis. Sweep is unevenness or curving of the piece. One can imagine how difficult mating or attaching members that exhibit these types of issues might be. As stated at the beginning of this article, structural members were not really designed for material handling applications.

Patented track rail sections, on the other hand, have much tighter dimensional tolerances, and with the common lower flange shapes and size allow for easy mating of track sections at install. The lower flange of patented rail hardens and improves over time, allowing sections of rail that are in good condition to be re-used at other locations within a facility again and again.

In addition, components such as switches, curves, and transfers can be easily added later to allow for material flow changes or expansion. One type of trolley can be used for the whole system, no need for tapered and flat tread trolleys on the same system.

CRANE 1 has the expertise to design and install patented track monorail and crane systems for effectively transporting loads up to 40 tons in high production, heavy duty applications.