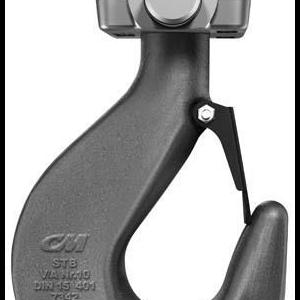 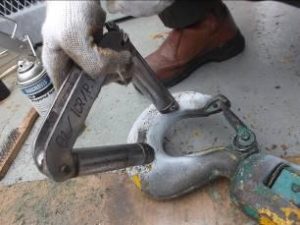 The ASME B30.10 standards cover the inspection of hooks for all hoists, cranes and rigging devices.

B30.10 requires that hooks be visually inspected during the normal course of use by the operator as well as periodically by a designated or qualified individual.  The frequency and documentation requirement of the periodic inspection shall be dependent on the type of equipment in which the hook is used, but at least annually. During the inspection, some of the conditions that should be looked for include:

Any deficiencies constituting a safety hazard found visually by the operator or during a periodic inspection shall result in the hook being placed out of service.  The hook may not be returned to service until approved by a qualified person.

1) Deformation:
Deformation of the hook can be an indication of overload, side loading or utilizing improper rigging techniques. In some cases, it may be apparent that the hook is deformed. Look for any bends, twists, cracks or sharp edges that could cut into your synthetic slings.
To check for less-apparent deformities, measure the hook’s throat opening. (Note: Typically this is not done during pre-operational inspections.) You should remove the hook from service if any distortion is noticeable. Check the throat opening.  It should not be more than 5% or 1/4″ from the manufacturer’s original dimension. Check your manufacturer’s recommendations.

Also, some hooks have manufactured marks or bumps between the throat opening and the saddle of the hook. These are reference points for measurement.  Each hoist manufacturer’s manual will tell you how to measure the hook.

2) Wear and Corrosion
Look for excessive wear or corrosion on the hook. Any wear exceeding 10% of the original section dimension of the hook or its load pin means the hook should be removed from service.

3) Nicks and Gouges
There is an easy rule of thumb you can follow when checking for nicks and gouges – any nick or gouge that you can fit your fingernail into is cause to remove the hook from service.  This includes non-OEM gouges placed on hooks to measure throat opening.

4) Latches
ASME states that hooks shall be equipped with latches and they have to be operable. Latches hold the rigging in the hook when in a slack position. They are not meant to be a load bearing piece, which can easily happen when using improper rigging techniques.  To check the latches, ensure that the latch bridges the throat of the hook when in the closed position and that it operates properly.

Hook latches are required unless it can create a hazardous condition. For example, if you have to climb on a load to release latch (fall hazard) instead of using a push stick to back the hook out of the attachment point.

7)  Field Modifications
Check for any modification such as unauthorized welding or grinding or other modification of the hook.  If any of these conditions are present or if you see anything on the hook that causes you concern, take the hook and/or hoist out of service until it can be replaced or repaired.

Non-Destructive Testing of Hooks and Shank

Hooks are subject to fatigue failure.  You generally get no warning in advance of a hook fatigue failure.  Fatigue failure is caused by the load, stress level and life count of lifting cycles. Heavy process-duty applications, overloads, old equipment and the use of below-the-hook lifting devices are all factors that may contribute to cumulative fatigue.

For hooks used in frequent load cycles or pulsating loads, the hook shank, threads and split nut if provided should be periodically inspected by Magnetic Particle or Dye Penetrant. (Note: Some disassembly may be required.)

A crane’s bottom block assembly is made of critical components including the hook that is subjected to loads and stresses during each lifting cycle. While hook failure often occurs due to an overload or tip loading of the hook, hooks most often fail due to cumulative fatigue from near capacity loads and high cycle count over the respective use period.  Hooks can also be manufactured with flaws that are not discovered at the time of manufacture or installation.  Most failures usually originate as a fatigue crack in the hook shank. The hook shank is the part of the hook that transfers the load to the hook block and is supported within the body of the block by a rotating bearing.  The hook shank, bearing, and nut are mechanical components which are not accessible to visual or NDT inspection without disassembly.

CRANE 1 uses various prove non-destructive testing techniques such as magnetic particle, magnetic rubber and dye penetrant that can give an added assurance in addition to the typical visual inspections and measurements performed on hooks.  Again, for NDT inspection of the hook, it is important that the hook block is disassembled to allow the most critical parts of the hook (shank and nut) to be tested as well.  The shank is the area where most fatigue failures originate