Cranes and Hoists are not designed to last forever 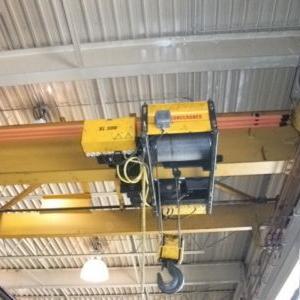 Overhead crane and hoist owners in the United States normally do not knowingly put their workers at risk.  But it is what you don’t know about the design life of equipment installed in the last 20 years that may, in fact, pose a considerable risk to the safety of your people.

In the last 30 years, the average weight of a standard 5 Ton Capacity Wire Rope Hoist has dropped in weight from over 1000# to as light as 500# in the current versions being sold.  Although both hoists will pick the same load, they likely differ in the ultimate finite life period of the unit.   Many of the newer European style hoists are produced with only a 5-year design life when used at the maximum of the specified load spectrum.  Since many of these hoists have been installed and in use for over twenty years, there is great cause for concern.

Knowing when cranes and hoists have come to the end of their design life and knowing the appropriate course of action to take at the lifetime limit are key issues for safety and production.  Cranes and hoists used beyond their design life limit are more liable to fail unexpectedly and sometimes catastrophically due to metal fatigue, excess wear and other modes of failure. As we explain below such failures represent a big potential liability to crane operators/owners and those engaged in the service, inspection and repair of cranes.

Cranes are designed for a finite life depending on the selected duty classification, but this life does NOT correlate to ‘calendar time’. In fact, it correlates to the usage of the crane taking into account the load spectrum (similar to % of the full capacity lifted over the operating life). Design life is consumed by the running hours of mechanisms (e.g. the hoist) and the work cycles of the structures (e.g. beams). These principals apply to all international standards including US and European standards which both have design classes to define how many times a load can be lifted and how many hours mechanisms can run at a given load spectrum.

Design Working Period (DWP) is a term used for the period measured in hours of use from commissioning to the end of design life. Beyond this design life limit, a crane or hoist must be considered unsafe to use unless certain actions are taken.

There is a huge population of cranes in the field which have been used beyond their design life limit because many crane users do not properly understand how design-life classification works or the potential consequences of exceeding it. To make matters worse some cranes work more intensively than originally intended (e.g. customer double shifts the operation) and/or load spectrum is increased (e.g. customer introduces a heavier product) as a result design life is consumed faster than intended.

We are not aware of any global figures for fatalities and serious injury due to crane failures caused by use beyond design life limit but many of us who work in the industry know horror stories.  The extent of the problem is perhaps why the International Standards Organization (ISO) released a new international standard ISO 12482:2014 on Monitoring Crane Design Working Period.  The standard explains how crane components can fail unexpectedly due to fatigue including metal fatigue, which is extremely difficult to predict or identify by physical inspection.  The time from a detectable crack to failure is usually very short and it is not realistic to disassemble hoists and cranes to inspect components at a frequency to be sure to catch failures caused by crack propagation.  Different components in hoists and cranes reach their actual lifetime limit at different times so knowing where and when to look is incredibly difficult and complicated. The likelihood of failure increases significantly at the end of design life and beyond.

The ISO standard makes it clear that cranes and hoists must be periodically monitored by the owner/operator to establish how much of the design life has been used up. Cranes and hoists that have reached the end their design life must be considered unsafe to use unless they have had a Special Assessment by a qualified design engineer to establish which components are safe and which are at risk of failing.

Following a Special Assessment, the qualified design engineer is expected to produce instructions for a General Overhaul to replace at-risk parts and any other tests or repairs deemed necessary to make the crane safe. Only after this designer specified General Overhaul can a crane or hoist be used for a further period of time and that extra period of time is to be specified by the qualified design engineer. In practice Special Assessments are expensive and it is difficult for anybody other than the original manufacturer to undertake them because the original design data is necessary.

The main areas for concern when considering a design life extension are typically welded structures because tiny welding defects can cause sudden failure after a lifetime of load cycling and the hoist because the moving parts experience high frequency reversing stress cycles. General Overhauls prescribed by design engineers therefore usually involve both NDT and extensive welding inspection which is very expensive when carried out at heights and may result in structural repairs or replacement. Furthermore, in our experience in the vast majority of General Overhauls to extend crane life include a replacement hoist because it is less expensive than replacing multiple parts in the original hoist. So Often the design engineer will conclude the design life cannot be extended or only by a short period. The designer may require a higher frequency of testing and inspection during a lifetime extension.

Exposure to financial claims and prosecution

If death or serious injury occurs due to the use of equipment that has become dangerous due to use used beyond its design life limit it is highly probable the owner/operator will face financial claims and face the possibility of prosecution under health and safety legislation.

The Wisdom of Repairing Old Cranes

The instinctive response of most customers, when presented with worn or failed parts, is to repair and put back into use without further worry. When all the risks are considered this is not the best strategy if the crane/hoist is at or beyond the design life limit.

If you are concerned with the ultimate life of your hoist or crane, do not hesitate to contact CRANE 1 and we will be happy to provide you with guidance to make the determination of future repair or replace decisions.