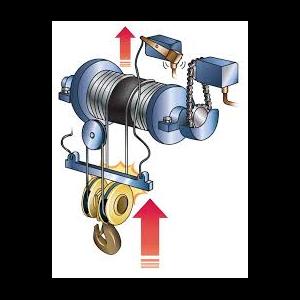 Hoist upper limit switches are safety devices that ensure that the hoist upper block cannot travel upward striking the drum, upper sheaves, and hoist frame.  When this “two-blocking” event occurs and the hoist block stricks the hoist with the torque provided by the hoist motor and gearing, a potentially fatal event will occur.  With ‘two-blocking”, the hoist wire rope often breaks instantly, resulting in a dropped load.

US-based ANSI Standards vs. European Standards (Standards & Equipment Differ)
The US-based ANSI standard was developed around hoists designed in the states using deeply grooved hoist drums that naturally guide the wire rope into the drum grooves.  The requirement for the block operated limit switch is based upon the possibility of rope overwrap if the hoist load is side pulled.  European hoists traditionally use rope guides that force the rope into the correct groove since they produce hoisting drums with less deep grooving.  The action of the properly functioning rope guide is to prevent the possibility of rope overwrapping the drum.  European manufacturers are not required to add the second limit to meet the European Hoist Safety Standards.

The Manufacturer’s Arguments
Manufacturers of European style hoists state that their hoists are safe without the secondary limit because the rope cannot overwrap due to the action of the rope guide.  Advocates of the requirement of the secondary limit switch on all hoists note that it is possible to damage the rope guide by side pulling the load.  A damaged or missing rope guide could allow the hoist cable to overwrap, resulting in a “two block” incident.

Inspections based upon all Domestic Codes and Standards
When a European style hoist that was installed without a secondary upper limit switch is assessed by a qualified Inspector,  the Inspector may often write up the lack of having a secondary limit switch as a safety deficiency because they are following strict adherence to the literal ANSI standard.  When they do not write the condition up, the Inspector has often made a reasonable judgment call based upon the interpretation of the original manufacturer, who did not provide the secondary limit switch.  That manufacturer has made the interpretation that their equipment meets the ANSI requirement.

Added Safety vs Added Expense
Adding the secondary limit switch when you buy the hoist new adds $500 or more to the cost and, also increases the hoists hook headroom by a few inches.  If you own a European style hoist without the secondary limit and, want to meet the literal interpretation of the ANSI standard and, have the added safety of a secondary limit, one can be easily added for fifteen hundred dollars. The added expense will make the hoist safer, and it will comply with the literal requirement of the ANSI standard.