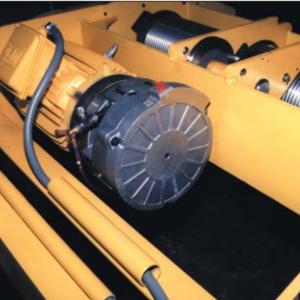 Reducing unplanned downtime of production critical industrial cranes and hoists is a major priority of our technical team. Traditional motor mounted hoist, crane and trolley friction disc brakes in contactor controlled cranes are are a potential trouble spot that can benefit from the use of oil shear brakes to help eliminate brake maintenance and unplanned downtime resulting from traditional disk brake failures.

Oil shear brakes were originally developed for use with the rigerous starts and stops of automotive transfer lines.  The oil shear brakes are designed for high repetitive brake actuation where heat dissipation is critical to allowing high cycle rates.

A large steel manufacturing facility experienced severe downtime on their overhead cranes due to repeated brake failures. The old shoe brake assembly required frequent adjustment and needed costly repairs on a regular basis. The brake linings were simply wearing out too quickly and could not handle the duty cycle in a major processing application.  A solution to the ongoing problemes needed to be identfied.  Electro Shear® brakes from Midwest Brakes were chosen to replace the existing hoist and crane brakes with a great reduction in unplanned downtime in maintenance as well as breakdowns.

How do they work?
Oil shear brakes transmit torque through the shearing of oil molecules between alternating paper friction discs and steel wear discs. The viscous shearing of the oil (automatic transmission fluid) dissipates the heat generated from the operation of the brake and is carried away by the continuous circulation of the oil.  The oil shear principle is the primary reason oil shear brakes offer extremely long service life and superior reliability.  Electro Shear brakes incorporate a true oil shear into the design where the friction discs are continuously flooded with oil to continually lubricate and cool friction disc surfaces. A true oil shear actually cuts across the film of oil molecules that is maintained between the alternating disc surfaces.  The oil itself acts as efficient power transmission medium, which relieves the mechanical friction surfaces of much of the work. The oil effectively absorbs and dissipates heat.