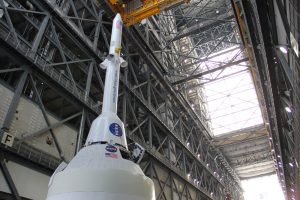 If your hoist lifting application involves precise placement of loads, a hoist with “true vertical lift” may be the best choice.  True vertical lift means that a hoist is able to lift a load straight up without involving any lateral movement caused by the hoist.  Chain hoists by design are always true vertical lift; however wire rope hoists are designed with reeving orientation of single reeved or double reeved.

True vertical lift on a wire rope hoist is accomplished with double reeving.  This reeving configuration involves two rope parts attached a grooved drum from each end. When the load is lifted from low hook position, the ropes wind around the grooved drum from both ends and towards the middle of the drum when the hook achieves the high hook position. This reeving arrangement allows the load and the hook to remain aligned with the drum’s center, which, in turn, achieves vertical lift.  True vertical lift hoist drums can be mounted parallel or perpendicular on single girder cranes and monorails which allows additional application flexibility for hook approach.  The use of an equalizer or idle sheave generally allows for a higher hook position and better headroom than a single reeved hoist.

Single reeved hoists have one rope part attached to the frame of the hoist and the other part attached to the drum.  When the load is lifted from the low hook position, the second part of rope wraps around the drum and causes the hook position to travel somewhat horizontally as the hook moves toward the high hook position.  This amount of horizontal movement varies based upon drum length.  Drum length varies based upon the number of parts of rope and the diameter of the rope.  There are some shorter lift single reeved hoists that minimize the horizontal movement by using a larger diameter drum and careful positioning of the rope attachment on the frame.  Although the movement can be minimized in some cases, there is always some horizontal hook movement in a single reeved hoist.   Single reeved hoists must be mounted with the drum parallel to the girder on a single girder crane or monorail.

Applications using true vertical lift hoists are ideal for operations that may require no side-to-side movement of the hook. This includes precision assembly operations and lifting operations in the aerospace industry.

Single reeving hoists are most commonly found in lighter capacities and standard lifting applications that do not require precision assembly due to their economical design.

Your CRANE 1 applications expert can assist you in determining the proper hoist reeving and configuration for your specific application.