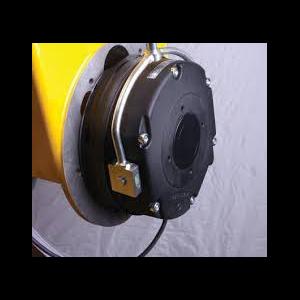 Inspecting hoisting brakes for proper functioning is a key element of a proper periodic inspection and important to ensure that the load does not drop unexpectedly creating a potentially fatal safety hazard.

How a Westin Style Mechanical Load Brake works:
During the hoisting mode the load brake is unlocked and freewheeling. The purpose of a “load brake in a hoist application is to keep the suspended load from falling without power to the hoist and independent of the motor brake.” When the load is being lowered the clutch locks stopping the load brake system from rotating. As soon as the motor stops driving the load, or the load travels faster than the motor then pressure will be applied to the friction disc. If the holding brake fails the load brake will completely lock to hold the load. You will also be able to lower the load to the ground. This is done by the self-adjusting clutch. The brake will tighten slowing the load, and the load brake loosens if it is going too slow. This is a rapid succession that keeps the load controlled. If you hear a clicking sound when the load is being raised, this is the pawl hitting the ratchet teeth. You should not be hearing this noise if the load brake is adjusted properly.

It is imperative that both the operator and the Inspector be informed on the types of braking used in a particular hoist and trained in determining whether both the Holding and Controlled Lowering are in proper operation.

New advanced hoist brake designs improve safety dramatically
New technology exists in some advance hoist designs to improve the safety of hoist braking.  These advanced hoists such as the Street ZX6, ZX8, and ZX10 allow you to have two independent holding brakes.  One is mounted on an output shaft from the hoist gearbox and another is mounted on the back of the motor which is the typical arrangement.  If the hoist motor coupling fails, the brake on the gearbox will still stop the load.  An optional Overspeed device can be fitted that will sense an overspeed in the gearbox that exceeds the output and applies both braking systems.  This will stop a freefall load resultant from a motor coupling or shaft failure.
The Operator must test the functioning of hoist brakes on near capacity loads
How and when does an overhead crane operator test the functioning of hoist brakes?  Federal regulation OSHA 29CFR1910.179(n)(3)(vii) states that: “The operator shall test the brakes each time a load approaching the rated load is handled. The brakes shall be tested by raising the load a few inches and applying the brakes.” So how exactly does one apply the brakes on an overhead hoist? Overhead hoist brakes are applied automatically when hoisting motion stops by releasing the control.  This braking action referred to as holding brakes, requires specific brake torque settings outlined in OSHA 29CFR 1910.179: “Holding brakes for hoist motors shall have not less than the following percentage of the full load hoisting torque at the point where the brake is applied. 125 percent when used with a control braking means other than mechanical. 100 percent when used in conjunction with a mechanical control braking means. 100 percent each if two holding brakes are provided.”
Testing hoist brakes is not so simple!
To test the holding brakes, we simply raise the load a few inches and stop hoisting. Holding brakes set automatically.
Now we need to test the controlled lowering.  Control braking exists to prevent the load from accelerating in the lowering direction. If the load is very high and a mechanical load control brake fails when you attempt to stop during load lowering, will the holding brakes still be able to stop the load safely?   Probably not.   We’ve seen this occur with very heavy loads where the holding brakes were no longer functioning properly and were unable to stop the load from accelerating beyond the braking capability of the holding brakes resulting in a loss of load control (dropped load).

For a hoist equipped with a mechanical load control brake, this procedure tests both the holding brakes and the control brakes. If an overhead hoists’s brakes are going to fail, they’re more likely to fail in the lowering direction. This procedure should be followed with the first load of the shift, and anytime a substantially heavier load is handled later in the shift. You can now see why holding brakes, when used in conjunction with control braking means other than mechanical, must be set to 125% of maximum hoist motor torque. Non -mechanical control brakes eddy current or flux vector only control descent speed while the hoist is moving, and are unable to assist with any load holding.

Operators are the first line of defense in accident prevention. Understanding how overhead crane brakes function, and conducting proper shift inspections and testing goes a long way toward ensuring a safer and more reliable operation.   Other standards that all overhead crane users should be familiar with include the ASME B30.2, ASME B30.11, ASME B30.16, and ASME B30.17. Also, read and be thoroughly familiar with your overhead crane user’s manual, and check local and state requirements to make sure you comply with all laws. Tests are an attempt at a controlled failure. Operators must follow all safe work practices and ensure their body is never in a position to be contacted by the load.

Operators must follow all safe work practices and ensure their body is never in a position to be contacted by the load.